As long as there has been news to share, there have been messengers to deliver it. In the early days, heralds or couriers relayed important messages. Town criers appeared around the time of William the Conqueror and were commonly seen in England in the 1600s and North America in the 1700s. Originally appointed to bring the King’s tidings, the concept was later adopted by the military to deliver their news. It soon spread to the private sector, first in large cities and then in towns and villages as people strived to improve their means of communication.

With the advent of the printed word, the town crier became nearly extinct, until the tradition was reborn in Europe at the start of the 20th century. Today, the town crier is generally appointed as a representative of the mayor and is expected to appear at official events.

How Sylvania Came to Have a Town Crier

The City of Sylvania appointed its first town crier in 1995. It was through Sylvania’s relationship with its sister city, Woodstock, Ontario, Canada, that the concept of a town crier was first introduced. Scott Frazier, Woodstock’s crier, paid a visit to Sylvania and so impressed its mayor and City Council that they initiated legislation to appoint a crier for Sylvania. The position was created by an ordinance of City Council on Mar. 20, 1995, and Michael Lieber became Sylvania’s first town crier. 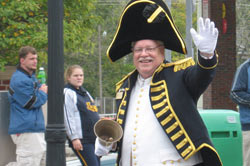 In his capacity as ambassador for the community, Mr. Lieber has traveled to Canada and as far away as Australia to spread the word about Sylvania. He has been recognized with a proclamation by the city of Amherstburg, Ontario, and has led, with other criers, several Canadian parades, including the Queen Victoria Day parade in Kingsville, Ontario. In 1997, he participated in the 7th Biennial World Town Crier Competition in Sidney, British Columbia.

Why Does He Do That?

Throughout his travels, the town crier is asked many questions by children and adults alike. Here, he shares the answers to some of the more common inquiries.

Q. Why do you ring a bell?
A. Years ago, an attention-getting device such as a bell or drum was used to signal to people that a proclamation was about to be read. Today, nearly all cries begin with the ringing of the bell.

Q. Why do you say “oyez”?
A. Opening a cry by saying “oyez” (pronounced oh-yeay) three times is traditional. Oyez is derived from a Norman word meaning “hear ye,” which was used to get people’s attention.

Q. What era does your costume represent?
A. My costume was chosen by the Sylvania Historical Society and represents one that would have been worn by a gentleman in the 1830s, which is when Sylvania was founded.

Q. Who writes your “cries”?
A. I, like most town criers, write my own cries. There are certain elements that most cries have in common, such as a greeting or salutation like “Melords, ladies and good citizens within my voice.” And many have similar endings, like “God save our Queen,” or “God bless the Constitution of the United States of America.” Beyond that, there is a lot of freedom in the wording, although we try to use the grammatical structure of the time period we’re representing.

Q. How many town criers are there in the world?
A. Surprisingly, just 350. There are only 13 in the United States, and most of those are located along the East Coast. There is one crier other than myself in Ohio, and just one in Michigan. California has the only town crier west of the Mississippi River.

Q. How did you learn to be a town crier?
A. I learned by attending competitions and watching other criers. The world competition is held every other year, and during off years there is a North American contest. They’re great fun, as well as being educational.

How to Hire the Crier

To find out more about town criers or contact other town criers, visit these sites:
www.ushistory.org/towncrier
www.americantowncriers.com